Please note: this website has been under construction, it is a work in progress, so stay tuned for updates. 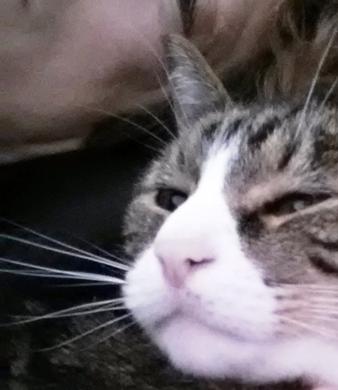 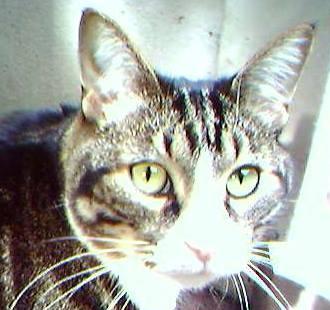 Mr. Frankie was a fabulous cat 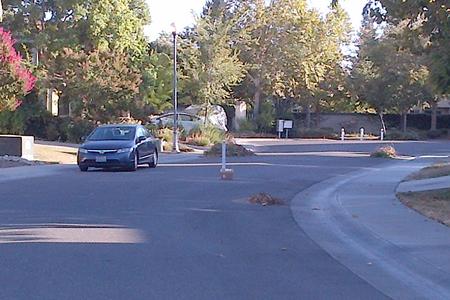 Baby kitty, bestest most handsome boy of all time. May he rest in peace. Please send him some love if you read this.

Frankie lives on in cyber space, he was quite a special cat, he had a special presence, he provided a bit of light and happiness, he was just a happy kitty, and he loved his pets (being petted by humans) and his freedom to go and be outside. This summer the weather has been like a hot oven and Mr. Frankie refused to go outside when it was so hot during the day, so he would finally go out when the temp cooled off, usually for just a few hours at night. Back in San Francisco, small dogs being walked on a leash liked him so much that they would stop on their daily walks to wait for him to come outside and give Mr. Frankie a sniff him nose to nose as if he were a small dog!  He loved people, he loved everyone. Mr. Frankie was a great cat to have around.

The cardboard box with white poster mailing box marks the spot where Mr. Frankie got hit by the bicyclist on quiet cul-de-sac who presumably took a late night shortcut home using the "cutaway" from Alhambra instead of taking Atlantis Drive.  Taking this shortcut late at night resulted in my cat's untimely death by someone rushing to get home.

Wish he was still here!

I miss him so very much

Send him some love!

He touched many people's lives, he made friends where ever he roamed and will be greatly missed. He was a prince, and nothing can take away the precious 12 years I enjoyed with him.

Contact me if you would like to share a photo of him or have any questions, See the forensics postmortem report which states he suffered from blunt force trauma injuries consistent with having been run over. Dr. Ed Fritz states in an email  8/31/2015  that: "I believe the accident caused the abdominal compression and herniation of intestines."

Be well Mr. Frankie, rest in peace. wish he had never moved up to Davis in the first place but San Francisco rents have shot thru the roof for everyone, pricing many out of the city. Most likely Mr. Frankie would still be alive if his owner had toughed it out and stayed in SF and could have avoided an extremely stressful and unhappy work environment which in turn caused Mr. Frankie to be extremely stressed--he was very empathetic-- and was being treated for IBS (lrritable Bowel Syndrome) in May. Mr. Frankie had finally gotten his IBS under control in July, just a month before he died on August 19, 2015.

The stress induced IBS--he had already undergone a round of antibiotics in March which did nothing-- caused Mr. Frankie to poop outside his litter box especially at times of high stress especially when his owner was going thru a difficult time at work from what turned out to be an extremely hostile environment.  Suggestions were made from friends and a co-worker back in Feb/Mar  to change the litter box, type of litter used, location of the litter box, etc. So I purchased different kinds of litter, a new extra large litter box, then a hooded dark blue plastic litter box and changed the location as well, first from the bathroom floor next to the toilet to the tub, and finally moved it to an adjacent room but, NOTHING worked.

In early April I was desperate enough to purchase an expensive $250 multi-cat (because it holds more kitty litter) auto-maid self cleaning litter box and he started to use it. But then he stopped using it because his owner lost her job within a short time of this purchase. In May I finally took him back to the vet who did a senior blood panel, found nothing wrong, but found severe inflammation of his intestines.  Mr. Frankie was a basketcase kitty who was simply stressed as a result of all the moves and his owner's work stress.

the weeks before and after his owner was fired. He took on my stress and paid for it with extremely poor digestion.

We both suffered horribly, but Mr. Frankie was just a kitty who didn't have to take on my stress. After giving him

prednizone (a steroid),  a "Happy Liver" pill daily and a weekly B-12 shot, all prescribed by the local vet,  he finally

stopped having the runs and started using the new litter box. Not until July did he finally get better.

It is a great shame Mr. Frankie had just gotten bette.  Mr. Frankie's beautiful coat was in the best condition

I've seen in years. The last photo(at right) was taken a week before he died, and shows he is in extremely good

health,  He kept his white paws very clean because he would frequently give himself a bath. He was a stunningly

beautiful cat and had the personality match. he was the Brad Pitt of male kitties if there is such a thing, I had even

thought of finding a kitty talent scout for him, he really was such an exceptional cat.

I look forward to closing this sad chapter as 2015 has been a year of losses, (job loss, Mr. Frankie's death, and being unable to afford living in San Francisco after the landlord nearly doubled the rent).  For those who read this space, apparently it's not over, as my kindest intentions to give away a recently purchased feline toilette, i.e., a $250 multi-cat auto-maid cat self-cleaning litter box along with $50 worth of recently purchased plastic receptacles and carbon filters for the expensive auto-maid litter box, has been misconstrued and misunderstood despite having already given away this litter box at the end of August.

It seems no good deed goes unpunished, however everyone who has received Frankie's cat items has been appreciative.

Without Mr. Frankie, it's alot quieter, no kitty to say "MAOW" when he wants his pets, no kitty to curl up sleeping on the couch, no kitty to greet you when you walk in the door, and no kitty to give you a knee/ankle rub, no kitty who watches you as walk across the room, no kitty to pet or play with or hang out with.  Mr. Frankie was special in that he would make social rounds in the neighborhood by finding "cat-friendly" neighbors and then hanging out with them if they were outside gardening or if the door/window was open he would hop in and say "MAOW" for a few pets. He was a special cat, very smart but not smart enough for the odd ball bicyclist taking a short cut in the middle of the night who wasn't looking.  He brought joy where ever he went and he is greatly missed by all.

Mr. Frankie was not your average cat and he LOVED to go outside for a few hours at night, but he didn't want to be outside for more than a few hours on average.   It's a shame he never saw the threat posed by the quiet bicycle riding in the night and neither did I.  Mr. Frankie never saw the bicyclist coming, never got a chance to yell for help or run away or come back home, he had a cat door in the backyard that he could use to gain easy access to the house. But he got knocked out hard by the crash with the bicycle, his cat mother never heard a sound, not a whimper, nothing from Mr. Frankie outside. I am so very sorry Mr. Frankie I wasn't there for you when you got plowed into by the late night bicyclist who never saw you in the street sometime before midnight on Tuesday, August 18, 2015, who left you at the side of the street half alive. RIP