Say hello to Mr. Frankie the cat--A fabulous cat who was gravely injured just before midnight (08/18/2015) when a speeding bicyclist wasn't looking ahead and ran over him by accident.  Then raccoons attacked him.

Mr. Frankie tragically died early morning on Wednesday, August 19, 2015 after a male bicyclist was speeding thru a dimly lit short cul-de-sac on his way back home from downtown Davis and didn't see the cat in the street. When I heard the sound of a bicycle crash and the male rider shouted out "Oh sh*t", I had no idea my cat was involved because I didn't hear any cat cries. I only heard the bicycle crash, around 11:45pm on 8/18/2015.  Frankie was within 90 feet of a working streetlight on the cul-de-sac, so he was visible. However,  a street light has been out for many months at the top of the Estaban Court cul-de-sac, on Atlantis--see photo--that may have contributed to poor visibility just past the bend in in the short street.

Mr. Frankie was on the street in Davis, CA the biking capital of the US, because it was cooler than sitting on the still hot concrete sidewalk (it was 90 degrees the night before), because he thought he was safe as there wasn't any street (auto) traffic in the cul-de-sac late at night . He didn't hear or see the bike until it was too late.  Most bikes, unlike cars, don't make any noise at all and "surprise" both animals and people. I never saw bikes coming thru the cul-de-sac late at night, and was clueless about the danger of whisper quiet bicycles.

Speeding bikes can easily kill small animals when they don't have a headlight and the biker isn't looking out for small animals on the road.

The bicyclist who hit Mr. Frankie got knocked off his bike, and apparently the bike fell on top of Mr. Frankie, causing further damage.  Frankie was knocked out, couldn't move or cry out, so the bike rider kindly moved Frankie's body over to the curb. Frankie wasn't wearing an ID collar because he hated wearing them and kept  losing them.  He had finally adjusted to Davis and loved going outside at night.

Unfortunately, within the hour, a posse of raccoons took advantage of Mr. Frankie who was paralyzed by the curb and started tearing pieces of his hindquarters as a snack, leaving Mr. Frankie to die a slow and painful death over 6 hours until I found him at 6:30am in the morning. I never heard any sound from Frankie on the street outside my front bedroom otherwise I would have ran out of the house from a deep sleep.

This website is dedicated to the memory of Mr. Frankie and all small animals who have lost their lives due to accidents caused by bicycles.

Using bikes as an alternative to cars is great all the way around, except for small animals like my cat Frankie can't always hear them coming especially if they appear out of nowhere from a cut-away access to a quiet cul-de-sac.

For 12 years, Mr. Frankie was savvy about dodging cars in San Francisco, avoiding raccoons and even wild dogs, but after six month in Davis, CA, wasn't savvy about the danger that bikes pose to himself, and how they can come out of nowhere and are silent if they are properly adjusted. 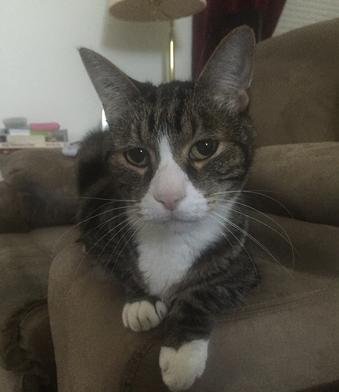 The purpose of this website is to raise awarenessthat late night bicyclists without a headlight or safety noise feature pose a danger to small animals and people. Mr. Frankie was a smart cat who didn't hear/see the bicyclist until it was too late. Mr. Frankie would still be alive if he could have seen/heard the bicycle.  Riding by bicycle is a great way to travel except if others can't see or hear the bicycle. Mr. Frankie and his owner thought that the very quiet cul-de-sac that had little car traffic was a safe place, it wasn't.

Bicyclists, please look out for small animals especially late at night, and share the road. The City of Davis, CA, is one of the most dangerous places for cats because of all the whisper quiet bicycles used by students and residents. Running over a cat like Mr. Frankie causes near death and critical injuries as noted below.

Mr. Frankie was caught by surprise by a fast oncoming bicycle that he didn't hear or see because he had his back turned to the bicyclist.  A post-mortem was performed to see if he had been hurt by blunt force trauma because his claws were in perfect shape, no fur or hair were in his claws and no cat cries or loud howling were heard.  He never got a chance to defend himself from other animals or even run away.

Mr. Frankie was surprised by a bicyclist he didn't see or hear until it was too late, he was in the wrong place at the wrong time..  RIP 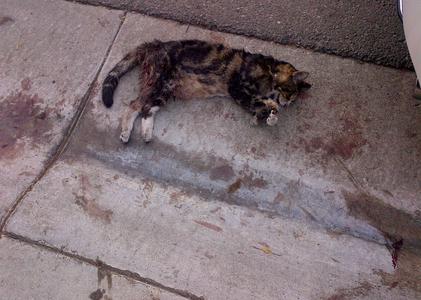 Mr. Frankie was a fabulous cat

He went into a state of shock, his right hip socket was fractured and tail was broken and his intestines had been "herniated" by blunt force trauma, he couldn't move or cry out.  Later raccoons took advantage and caused further damage. A post-mortem report confirmed he had been run over but this wasn't cause of death--see Dr. Fritz report.

The feedback I have received from the largest bike club in Davis, is that cats should be locked up at all times, that they have no right to go outside without being on a leash or restricted in a backyard. I never realized how DANGEROUS bicycles are coming thru a quiet cul-de-sac via a cutaway late at night. I have never seen any bicycles turn onto the cul-de-sac that I live on, and never, ever thought that bicycles posed a grave threat to my cat's safety. But it's too late now.

All I can do is spread the word of caution to other cat owners who have left the SF Bay Area thinking Davis was a very safe place for everyone, and it's totally not a safe place at all, especially for cats like Mr. Frankie.